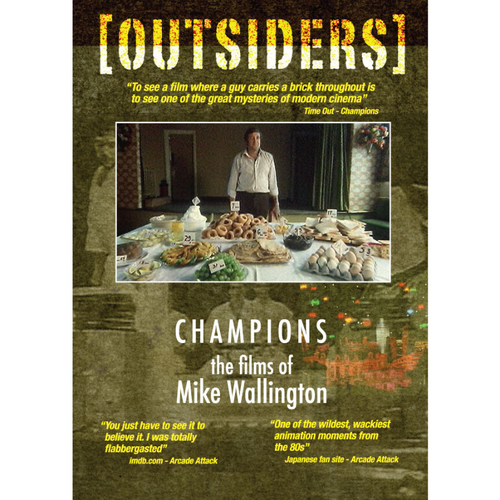 On the last nightbus home before TV made all our lives duller, Mike Wallington made three cinema shorts in the late 70s which are still talked about today but very seldom seen. The most recent internet chat about his work has been a discussion of just what drugs he was using while making the films. His subject is the pursuit of excellence by marginals and the celebration of dreams dreamed on the far ledge of human endeavour. They are films which are intentionally a bit rough at the edges. They are strangely incomplete, yet instantly memorable, timeless and mysterious. And they deserve a new audience.


Champions (1978) - 20 mins. You will not believe how fast experts can neck large quantities of beer. Peter Dowdeswell, the legendary eater/drinker, describes and shows us some of his feats which fill the Gluttony pages of the Guinness Book of Records. In a nearby English village, there is another champion eater - he does it just for a bit of fun. But Dowdeswell is serious. He cuts a more profound figure. Yet he never did fulfill his dream of holding every record on the Gluttony page, because the publishers withdrew mention of him for years on health & safety grounds.


Ice Break (1979) – 20 mins. Sensei Frank Perry is a unique product of South West London, a masterful martial artist who achieves mind-over-matter by some of the hardest tameshiwari ( or “breaking techniques” ) ever captured on film. Training, of course, is everything. For charity, Frank demonstrates how to break ice. This is an extraordinary display of power concentrated in the moment.


Arcade Attack (1980) – 25 mins. The first great video game was not Space Invaders, but Defender, created by Williams Electronics in 1980. With five buttons and a joystick, it was too difficult for most players. But it quickly gained a cult following and remains a favourite even today. It came out at a time when pinball was changing from mechanical to electronic and no-one knew who would win the war of the arcades – the silver ball or the alien video invaders. Arcade Attack starts off as an ordinary documentary on the pros and cons of the warring factions. Then it morphs into an extraordinary mythic battle between back-glass superheroes and anything the virtual world can throw at them. Animation by Phil Austin and Derek Hayes. Game Over.