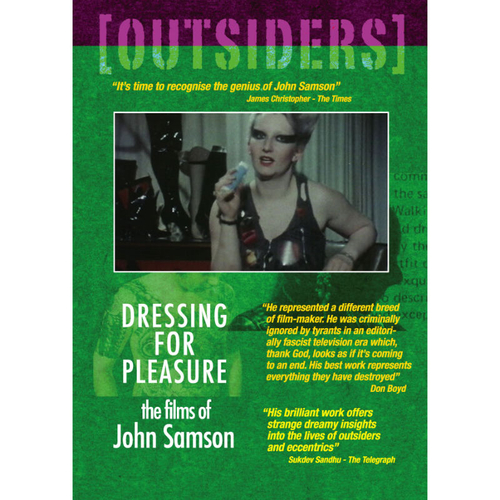 John Samson died in 2004, leaving a remarkable legacy. Born in Ayrshire, Scotland, as a teenager, Samson moved to Paisley near Glasgow where he remained for the formative years of his life. He left school at 16 and took on an apprenticeship in the Clyde shipyards learning precision tool-making in an engineering firm. He became involved as a spokesperson in the first Glasgow apprentices' strike, and he began to engage with the Anarchist movement, joining the Committee of 100 and participating in a number of Nuclear Disarmament protests. Then he fell in with a bohemian circle that included artists, writers and musicians. He taught himself guitar, took up stills photography and by the mid-70s began to make films.


These experiences - working class roots, a passionate interest in radical politics and bohemia - fuelled what would turn out to be a life-long fascination with individuals and groups operating at the margins of society. His subjects are people with unusual lives and obsessions, luminal figures who fail to square neatly with the models for identity and behaviour propagated by contemporary culture.


Tattoo (1975) - 20 mins. Based on the art of tattooing, tattoo artists and their clients, with interviews exploring this fascination. The film builds up to a long climatic scene, often since replicated in other films on the subject, featuring tattooed bodies displayed like an art gallery.


Dressing For Pleasure (1977) - 25 mins. Here the subject of fetishism in clothing - rubber, latex, leather - is explored. Features SEX, the boutique run by Malcolm McLaren (manager of the Sex Pistols at the time) and Vivien Westwood on the Kings Road, London. Central to the film is a magnificent studio set constructed mainly by Samson himself in the shape of the fetish magazine Atomage with actual turning pages and photographs which come to life. The film was banned at the time by London Weekend Television and has become one of those rare films more quoted than seen. It won Outstanding Film Award at the London Film Festival that year. Recently it has toured the world as part of the Vivienne Westwood retrospective exhibition and has been quoted in many other films including Julian Temple's The Filth and the Fury (2000).


Britannia (1978) – 20 mins. A group of volunteers work on the restoration of an old locomotive. This unashamedly poetic piece draws strongly on the theme of resurrection as Britannia rises like a phoenix from the ashes of its desolate resting place. Inspired by the work of another British poetic film-maker - Humphrey Jennings.


Arrows (1979) - 33 mins. A film about the world of competitive darts. The often-lonely life of the celebrity sportsman, constantly on the move and always in the public eye, fascinated Samson. In Eric Bristow, already successful and totally self-assured in his early 20s, he finds a compelling figure through which he explores a sport as well as a specific period of British social life and culture.


The Skin Horse (1983) – 52 mins. Focusing on the Outsiders Club, a dating agency for disabled people, it deconstructs popular imagery of the handicapped to show how they are either abused or patronised, portrayed as monsters or as children. It does what all Samson’s beautiful and vivid documentaries do : challenge our assumptions about what is normal and what is abnormal.


“He represented a different breed of film-maker. He was criminally ignored by tyrants in an editorially fascist television era which, thank God, looks as if it’s coming to an end. His best work represents everything they have destroyed” Don Boyd


“His brilliant work offers strange dreamy insights into the lives of outsiders and eccentrics” Sukdev Sandhu, The Telegraph (London)