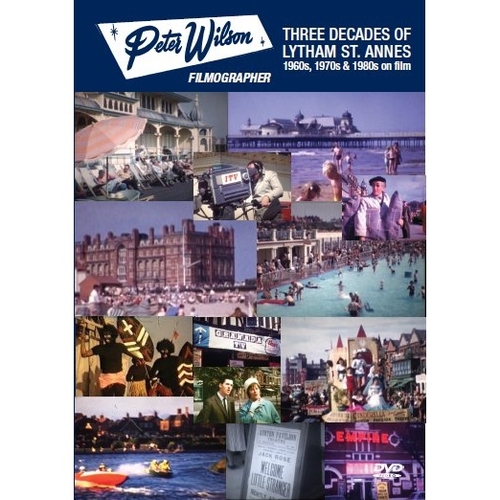 Peter served in the RAF and after the initial training as an air traffic controller, he was attached to an aerial photographic squadron based in North Africa in 1943, then into Italy till the end of the War. Arriving back in the London area he found a position in a film unit making advertising films

1951 Peter arrived in St Anne’s on the Sea from Maidenhead Bucks.
He poked his head round the door of the Ashton Theatre and said “have you got a job for me”, and Jack Rose, theatre manager took him on as a Stage Manager and set designer.

Meeting professional and amateur actors from, for example the Fylde Coast Players and local Operatic Societies, for whom he made all the scenery. When it came to making feature films he had no trouble casting the parts, coupled with his scenery making skills, he was well on his way to making the films you will see in this DVD.

Who else could build a hotel on top of a sand hill at the bottom of Cartmell Road creating a desert Island and complete the filming all in one day? Who else could turn a piece of hardboard into something looking like stone as was used in “The Day Of The Parade” For the War Memorial.

Sit back enjoy the films and see the St Annes of yesteryear. Starting with the “Vanishing Village” which was set on the Old Links Golf Course and depicted the tumble down cottages and then to the old Lytham Railway Station in Station Road. You will recognise Peter as the Stage manager wearing a bright white shirt in “This is Repertory” or as the artist in “The Man With The Parcel“

Looking back now over 50 years, one see’s the many things in our local lives, that have been altered or have gone forever, never mind the sort of tales he used to make up his stories with! When we released “The Town From The Sand” a few years ago, Peter Wilson was still alive, his short films mean a lot more to me now – John Bentham

We have tried our best to find the correct date for each film, if you know of anything, please let me know – johnb@outlaw23.com