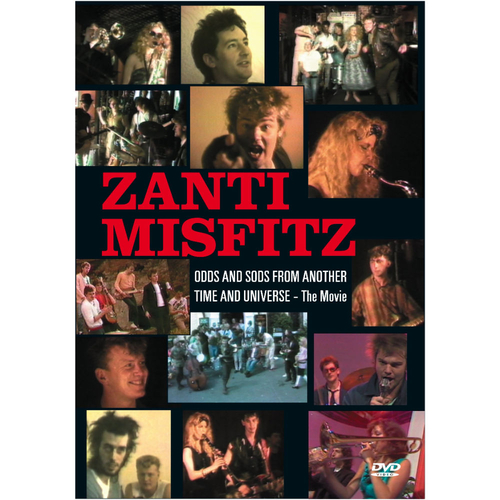 Odds and Sods - The Movie DVD

ODDS AND SODS FROM ANOTHER TIME AND UNIVERSE : The Movie

Zanti MisfitZ were born out of the boredom of unemployment, a love of all things rock n roll and a desire to make art and noise! The band formed in 1979 and adopted the mid seventies DIY punk ethic of making music and promoting yourself. They soon garnered a big local reputation for outrageous theatrical live shows, which rapidly spread nationwide.

By the 80s they had became pioneers in the burgeoning promo/home video phenomena, working with their manager, John Bentham to make a bundle of primal yet effective video clips. This culminated in the production of The Famous Smoking Money Movie ñ the first ever release from legendary the Jettisoundz video label.

This DVD contains not only The Famous Smoking Monkey Movie but also a plethora of previously unseen video clips, out takes, their only TV appearance and other gems.

The first two were from Stockport 1981 with Tim Clark on drums, next is from the Belle not used at the time, and an edit from JB's couch with 'Summer Days'. Take in the role play of Granada TV with a live 'love Ends At 8', followed by three tracks from Gentle Pornography, taken from a film by Karen Bentham.

Plus a 30 min edit taken from all the footage that we shot for the film, with some sweaty bits, plus edits of live videos on the end. They just fitted our 3 live tracks (martians, constant buzz & dorky)