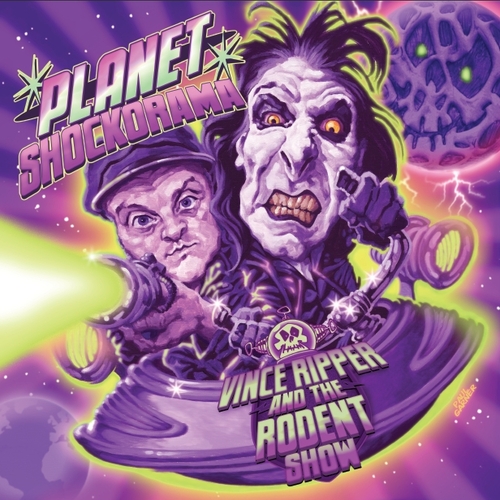 Vince Ripper And The Rodent Show

Not since Orson Welles' War of the Worlds radio broadcast has humanity been driven to run screaming through the streets! PLANET SHOCKORAMA delivers the shivers to an unsuspecting world, infecting the Earth with hell-bent, sex-crazed, rock'n'roll sounds emanating from the deep, dark cosmos! It's the War of the Worlds all over again, except this time it's REAL!

Now begins the release schedule, the odd thing will appearing from now but the main release will be WORLD WIDE DIGITAL across 75 outlets internationaly in Mid-June. That will be launched by Beginning-June with UK based CD release of the album

Vince Ripper & the Rodent Show have a place on the Internet, starting with thier first release 'Boneyard a Go Go!!!', followed by 'Boneyard Hits' and 'Its Fun To Be A Monster'. They have a range of videos, and started off life covering 'Alien Sex Fiend' & 'Cramps' tracks, but have turned this into a full on thing with 'PLANET SHOCKORAMA'. Their shows are an experience to behold, they have done them up and down the country, they are now on the cusp of leaving, with shows pencilled in Europe, Mexico & the USA.