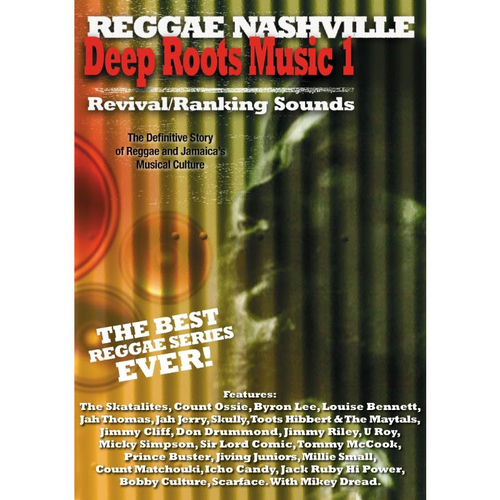 The ultimate word on the history of reggae, this six part series, shot on film by an Oscar nominated cameraman, was produced in the early 1980s, just after the premature death of Bob Marley. It was a time to look back and to look forward. The films feature some amazing archive, much of it never seen before, of how Jamaican music developed before it became famous world-wide. Film-maker Howard Johnson interviewed the important figures who had influenced the course of the music. Along with musical performance there are interviews with cultural historians, folklorists and musicologists, along with those who created the music and those involved in the early days of Mento, Ska, Rock Steady and the sound systems. Also toasters, record producers and many great Reggae artists of the day.

“Captured on film - a nation of singers and dancers”

“The most amazing footage of African music in the Caribbean”

How kumina, poco, burru and mento - the music of slaves from Africa - became the dance form of ska that conquered the world. How folk songs and calypso kept culture alive and sensational footage of how the revivalist churches carry a mix of Christian and African themes into the Jamaican mainstream. Great footage of The Skatalites, Count Ossie, Toots Hibbert, Don Drummond, Jimmy Riley and Jimmy Cliff.

“If you thought you knew everything about sound-systems, think again – it’s all here. Raw. Beautiful. Powerful”

“Never-before seen interviews with the founders of an art form”

The development of sound-systems and the amazing origins of deejaying and toasting. Rare footage of U Roy, Prince Buster and the Skatalites. Memories of the one and only Duke Reid. The first and only time that the originators of talk-over styles – Sir Lord Comic and Count Matchouki – have ever performed together. And a glimpse of the real thing, a Jamaican sound-system, Jack Ruby Hi-Power, playing a Saturday night in Ocho Rios.