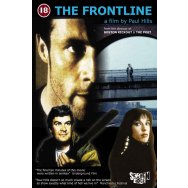 From the maker of BOSTON KICKOUT and THE POET

When young film-maker Paul Hills was asked at an interview for Plymouth film school what he wanted to do in the industry he replied "direct feature films" he was told "you have more chance of being struck by lighting twice than ever directing a feature film". Two year later he embarked on making The Frontline.

Filmed in the Moss Side area of Manchester this gritty tale of futility pulls no punches in its graphic depiction of drug addiction, political corruption and society out of control.

On his release from mental hospital James re-kindles his relationship with pirate DJ Marion, helping her to kick her heroin addiction and moving in together with plans for marriage. However Marion is found dead. Suicide? The police would have us think so. But James has other ideas.

With the help of Marion's father James follows through his plan to trap and expose the "protected" killer. A plan that leads to a tense and bloody showdown that will leave you shattered.

As you'll hear on the director's commentary, making The Frontline was a creative struggle of epic proportions. Hills, like a modern day King Canute, empowered with superhuman willpower and a titanic endurance, waged a war to end all wars for three long years with a small band of like-minded irrepressibles to shape this film out of the most meagre of raw materials - 12,000 pounds - for the money this is the greatest film ever made. It nearly killed Paul Hills. Now we can watch it in the comfort of our living rooms.

With special appearances by Anthony H. Wilson and The New Fads.