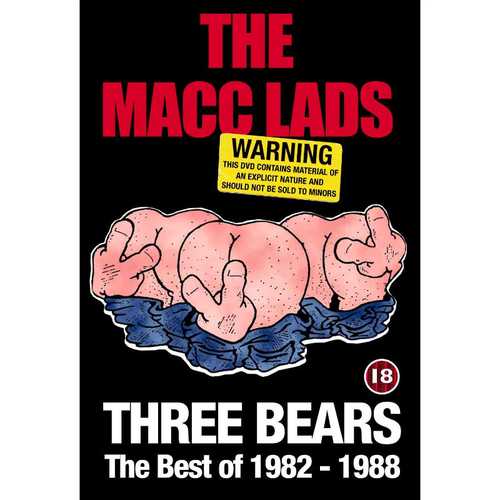 
'Filth - the most disgusting thing I have ever heard!' Tory MP Geoffrey Dickens on the Macc Lads debut album - Beer & Chips & Sex & Gravy.

The irony of Mr Dickens comment is, of course, that the album in question was actually financed by a government grant on the Enterprise Allowance Scheme. Add to this the fact that when the funding was withdrawn and that the papers latched onto the story the resultant furore catapulted the Macc Lads to becoming one the most notorious band in the county's rock n roll history. From playing more informal gigs, like the Manchester Gallery show included here, they were suddenly playing to sell-out crowds in some of the biggest venues in the UK. Along the way they were also getting systematically barred from virtually everywhere. What started out as a dirty joke became an unstoppable, disgusting roller coaster of punk rock mayhem, bad taste and literally gallons of Boddingtons beer.

Three Bears is made up of promo clips and live clips shot at various venues around the UK - the Carleton Club Morecambe, Fulham Greyhound, Goldwyn's Suite in Birmingham and the infamous 'impromptu' gig from the back of a wagon on the promenade in Blackpool. Essentially a 'best of ' collection from 1985-88, Three Bears features various line-ups backing permanent fixture Muttley. The Manchester Gallery gig was shot two days after Christmas in 1985 just after the release of their debut LP - who could have predicted what came next. All in all, this DVD documents the Macc Lads rise to fame as the most disgusting, nastiest, ugliest, sexist, rudest, crudest, lewdest, drunkest band in the world. Get the beers in!